The third Myanmar Digital Rights Forum concluded on 19 January in Yangon with a call for new policy and regulation that would safeguard digital rights in Myanmar, and a fully consultative process to achieve this.

The forum was attended by around 250 participants, with almost an even split between women and men, indicating a well-balanced interest among the younger generation in getting involved in digital rights.

Around half the participants identified as civil society, with others identifying as academics (19%), private sector (7%), public sector (9%) and media (3%). Senior government officials from the Ministry of Transport and Communication (MoTC), Ministry of Labour, Immigration & Population (MoLIP), Ministry of Information (MoI), and Ministry of Religious and Cultural Affairs (MoRCA) spoke on panels which also brought together Myanmar and international experts and representatives of private companies such as Ooredoo and Facebook. The MDRF continues to attract new participants to the dynamic discussion on digital rights. This was the biggest MDRF to date, with 85% of participants having not attended the 2018 Forum.

Participants welcomed the government’s announcement of its plans for open consultation in February 2019 on a cybersecurity policy and legislative framework which would address the related issues of e-government, e-commerce and cybersecurity.  This will be an important cornerstone law in preparing Myanmar for the “4th Industrial Revolution.”  Stakeholders underlined that trust is a key component of any e-government and e-commerce system and that trust in the system comes when users understand that their digital rights and digital privacy is protected.  The work on the new cyberlaw is part of the World Bank’s support to the Myanmar government on telecoms reform.  Plans for this were presented by May-Ann LIM of TRPC Pte Ltd consultants.

These are being used by MCRB in its advocacy with government, parliament and other stakeholders on building a rights-respecting cybersecurity framework.

There was continued interest at the Forum in seeing progress on the draft Right to Information law, currently awaiting further action in the Ministry of Information, as well as a renewed call to decriminalize all criminal defamation provisions including Section 66d of the 2013 Telecommunications Law. Participants were keen to learn more about the government’s plans for digitizing national identification (IDs) through the use of “smart cards” that are proposed to include the same information currently found on the physical ID cards.  Participants advised the government to be clear on its objectives and plans for issuing these smart IDs and to ensure there are appropriate data protection requirements in place before issuing the cards, rather than trying to retrofit protections once they are issued.

The Forum focussed on three inter-related elements of digital rights Freedom of Expression, Privacy and Access.  Participants were polled on their views on online freedom in 2018, with almost half believing it had deteriorated (41%) compared to a quarter who had seen improvement (25%), and the rest seeing no change (34%).  Priorities for improving it included improved regulation (58%), public education (24%) and capacity building for government (11%).

There was more pessimism about online privacy and security, with 66% believing it had worsened in 2018, compared to 26% who thought it has stayed the same and only 8% believing it had improved.  Again, regulation (66%) came top of the priorities to address this in 2019, with 22% highlighting the need for user education as important.

The most positive picture came concerning equality of online access, with 78% believing it to have improved, and only 4% saying it had worsened. Priorities for improving equality of access were identified as reducing the urban-rural divide (47%), support for ethnic languages (27%), reducing inequality of access for persons with disabilities (11%), and addressing the gender gap (10%).

Plenary keynote addresses were given by the Permanent Secretary of the Ministry of Transport and communications, U Soe Thein, award-winning investigative journalist Swe Win of Myanmar Now, and Swedish Ambassador Staffan Herrström. Video addresses were made by British academic and author, Dr Paul Bernal (transcript), and Clément Nyaletsossi Voule UN Special Rapporteur on the rights to freedom of peaceful assembly and of association who is compiling a thematic report on how these rights are exercised and protected in the digital age (see final agenda).

Presentations were made on digital rights indexes and initiatives, highlighting their relevance to Myanmar, including:

MCRB hosted an open session on holding the government and companies to account using publicly available information, which included presentations by Vicky Bowman of MCRB on current legal disclosure requirements, Htin Kyaw Aye of Ananda on sources of online information about Parliament.

The first two Myanmar Digital Rights Forums were organised in in 2016 and 2018. The 3rd Forum was co-organised by MCRB,  Freedom of Expression Myanmar (FEM), Myanmar ICT for Development Organisation (MIDO) and Phandeeyar, which hosted the Forum.  It was co-sponsored by the Embassy of Sweden and Heinrich Böll Foundation. See also digitalrightsmm.info 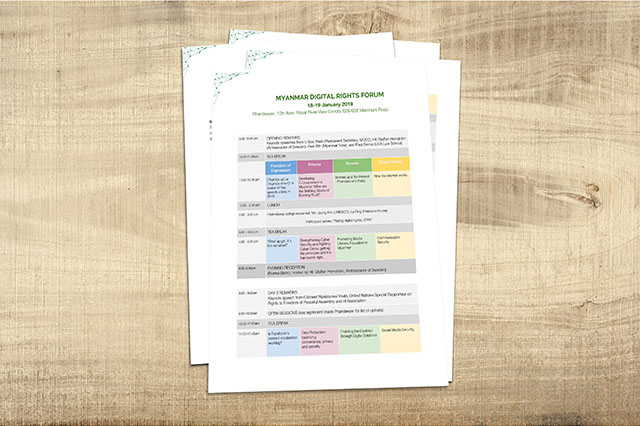 Freedom House’s ‘Freedom on the Net’ (2018) in which Myanmar scored 64/100 as ‘Not Free’ (trailed by Thailand, Pakistan, Vietnam and China within Asia)

Myanmar Legal Requirements for Disclosure of Information about Investment: Work in Progress

Developing E-Government in Myanmar: What are the Building Blocks of Building Trust?