MCRB and the Norwegian Environment Agency convened a meeting with oil and gas companies on 20 August in Yangon to discuss lessons learned from the Initial Environmental Examination/Environmental Impact Assessment (IEE/EIA) process and implications for technical assistance to the Ministry of Environmental Conservation and Forests (MOECAF) and Myanmar Oil and Gas Enterprise to develop sector specific EIA guidelines for the oil and gas sector.

The objectives of the meeting were to:

The meeting followed on from an earlier meeting convened in August 2014 by MCRB with key government departments at national and sub-national level and oil and gas companies to discuss the IEE/EIA process prior to the commencement of companies’ undertaking IEE/EIAs for offshore 2-D and 3-D seismic. 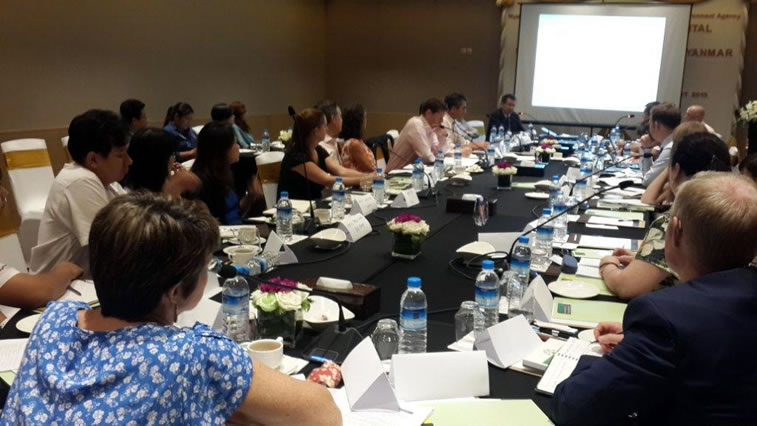 MCRB noted that the Myanmar government has not yet finalised its EIA Procedures although a near-final draft (prepared with ADB assistance) is in circulation and companies have been encouraged by MOECAF to work on that basis (see June 2015 draft Procedures and Annex 1).  The Procedures are currently with the Attorney-General’s Office, after which they will return to MOECAF with the AGO comments before submission to the MOECAF Minister and then the Cabinet for approval.

State of play of company operations

In the last 12 months, some companies have undertaken research and analysis and stakeholder consultation and completed IEEs (which MOECAF clarified was the appropriate assessment for offshore seismic), and have submitted them to MOGE/MOECAF.  It should be noted that the formal Project Proponent is MOGE, and not the foreign company who is the Contractor.  This is made clear in the MIC Permit.

Some companies are in the process of finalizing IEEs. One company had submitted an IEE 10 days after PSC signing, to meet the 2014/5 weather window. MOGE had obtained an approval document from the MIC.  They had completed the first season of shooting seismic and would submit an end of survey report to MOGE.

Companies who have submitted IEEs in the last few months have received only limited feedback from MOECAF and MOGE.  This is of concern as they want to complete seismic surveys during the weather window (November 2015 to April-May 2016).  Commencement of operations (and the lead-in for procurement) requires the appropriate permits and clearances to be in place, although currently it was unclear what these were in the absence of EIA Procedures whose publication would put the system of Environmental Compliance Certificates in place.

PSCs also contain a contractual requirement to complete an EIA and SIA within 6 months of signing (which for most companies is now imminent or past). This was believed to have been included by MOGE without reference to MOECAF’s procedures.  Six months for an EIA is an unrealistic timeframe (particularly in the current circumstances). There is however scope for this to be extended by MOGE[1].

The PSC wording might also be taken to read that once the first IEE/EIA is approved, it covers all future operations.   However the dialogue with MOECAF has clarified from both a MOECAF and company perspective that IEE should be conducted for offshore/onshore seismic, and an EIA should be conducted for subsequent phases, and this is reflected in the Annex to the June 2015 Draft Procedures.

The NEA team introduced the overall TA programme which was a precursor to an Oil for Development Programme (OfD) which the Myanmar government had requested in 2012.   OfD aims to assist around 12 developing countries at any time with holistic and sustainable development of their hydrocarbon resources, based on four pillars (resources, revenues, environment and safety) in a 3-5 year programme.  A programme for Myanmar is intended to start in 2016.

Eureka Energy introduced the technical assistance (TA) team (SLP and RSK) who would work with MOECAF and MOGE to establish concise Oil and Gas EIA guidelines to be submitted to MOECAF for approval in January 2016. These were intended to assist both companies and MOECAF in the production of IEEs/EIAs to international standards.  The TA team’s initial analysis of the draft Procedures had identified 24 aspects which could be covered in sector-specific guidelines, but this analysis was subject to further discussion and a round of consultation in November (see presentation by Bjorn Kristoffersen, subsequently amended to reflect further discussion with MOECAF):

Companies made the following comments:

In response, the TA team noted that they would liaise with ADB on the interplay between the general and sector-specific guidelines and ensure that these were realistic, pragmatic, consistent, added value, and did not repeat the general guidelines.

The TA programme also incorporated capacity-building for government which was a recognised need.  The team was strongly encouraged by companies to focus on capacity-building and  conduct its training of MOECAF (planned for late September) based on live examples i.e. the IEEs on MOECAF’s desk.

MCRB held a Dialogue on offshore gas in Myanmar at Hotel Kyaukphyu to discuss how to build company-community ‘Partnerships for Development’ and how best to ensure that the eople of Rakhine State will benefit from offshore gas development in Myanmar.

At the invitation of the Joint Bill Committee which is currently considering the draft Petroleum Bill, MCRB has submitted comments to Parliament which draw on the findings of the 2014 Oil and Gas Sector Wide Impact Assessment.

On 8 June 2017, MCRB made a written submission in Burmese to the Pyidaungsu Hluttaw Joint Bill Committee on the Artisanal Oil Production Bill. The bill is currently under discussion in the Hluttaw.