As the June 2011 UN Guiding Principles on Business and Human Rights (the UNGPs, available in English and Myanmar) enter their tenth year, and to mark the launch of the ‘Next 10 Years’ project, MCRB has produced Burmese language subtitled versions of four short introductory videos on the UNGPs originally produced in 2015 for the Global Alliance of National Human Rights Institutions (GANHRI) by the MCRB’s co-founder the Danish Institute for Human Rights (DIHR).

These four videos cover the three pillars of the UNGPS (the government’s duty to protect human rights from the impacts of business, business’ responsibility to respect human rights (including through human rights due diligence, and access to remedy. The fourth video covers National Action Plans on Business and Human Rights

Since MCRB opened its doors seven years ago in July 2013, the UNGPs have underpinned its activities. The three pillars (protect, respect, remedy) form the basis for MCRB’s Theory of Change. 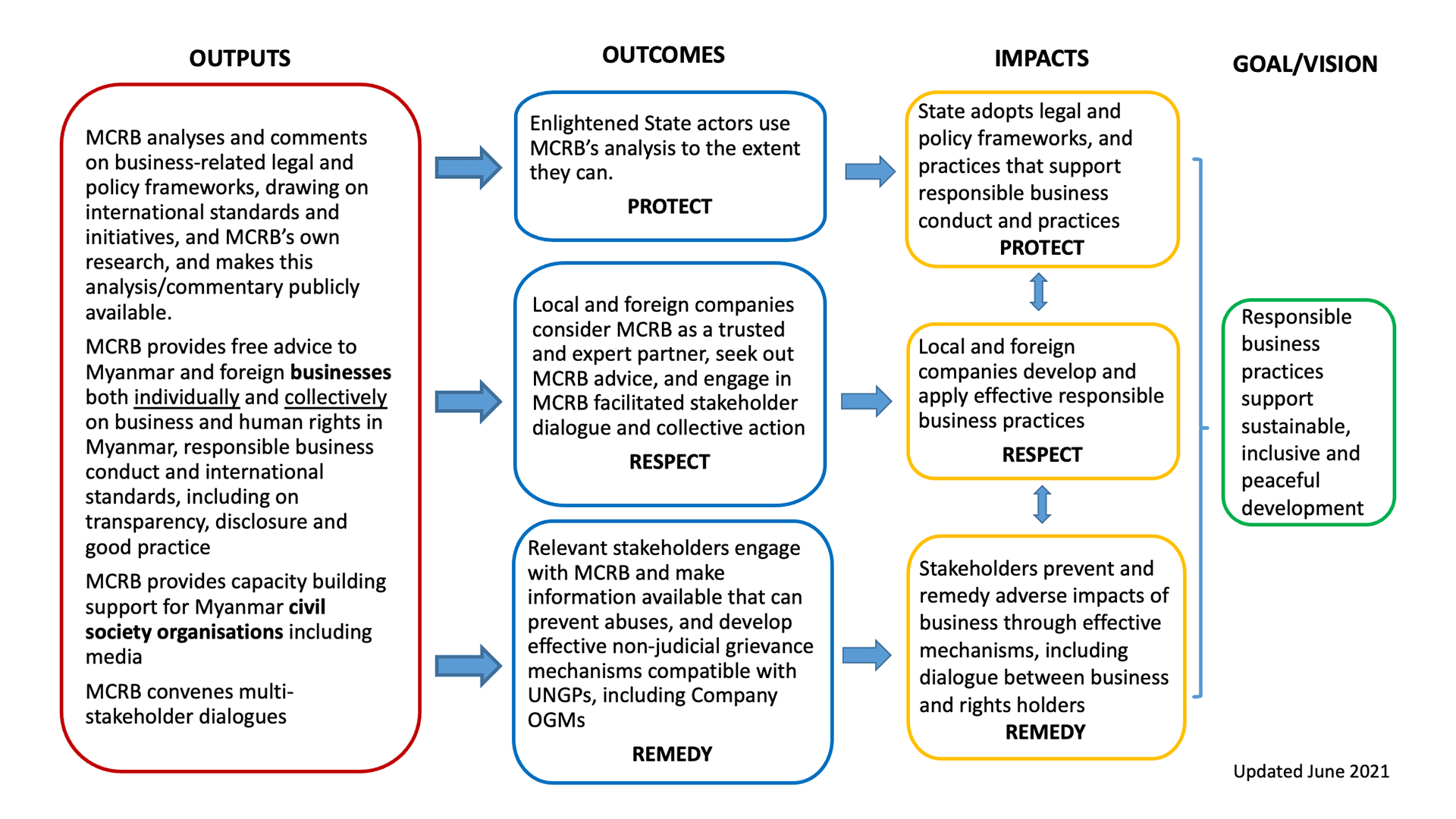 Since 2013, MCRB has introduced the UNGPs and set them in a Myanmar context at well over a hundred workshops and training sessions for government, private sector and civil society groups and the Myanmar National Human Rights Commission who recently referred to them in its statement on the landslides at the Hpakant jade mines in June 2020. A number of Myanmar companies with whom MCRB has engaged have adopted Human Rights policies, in accordance with the UNGPs.

Due to MCRB advocacy, UNGP concepts, and in particular the need for companies to respect human rights, and to provide access to remedy through operational grievance mechanisms (OGMs) have been introduced through MCRB advocacy and incorporated into Myanmar government policies. The Thilawa Special Economic Zone Notice 4/2015 on responsible investment sets out the government’s expectation that investors will respect human rights. It also references the need for investors to establish OGMs and refers them to UNGPs 29 and 31 which set out effectiveness criteria. Similarly, as a result of MCRB advocacy, the draft Environmental Impact Assessment (EIA) Public Participation Guidelines reference UNGPs 29/31 in guiding companies on establishing OGMs, and the requirement for a UNGP compatible OGM is also included in the legally binding Environmental Compliance Certificates (ECCs) issued by the regulator at the end of the EIA process.

On 7 July as part of a launch of a project entitled ‘UN Guiding Principles on Business and Human Rights at 10’, the UN Working Group on Business and Human Rights is undertaking a new consultative project to chart a course for a decade of action on business and human rights. This effort, informed by wide-ranging stakeholder consultations, will take stock of achievements to date, assess existing gaps and challenges, and, most importantly, develop an ambitious vision and roadmap for implementing the UNGPs more widely and more broadly between now and 2030. The project is supported by the Government of Germany–including in the context of Germany’s Presidency of the EU. The global consultation process to develop the roadmap will involve collaboration with OHCHR and UNDP as well as a range of other partners.

The primary focus of the initiative is to build momentum towards 2030 for mainstreaming and scaling up implementation of the UNGPs, and consequently contributing to the Decade of Action for the Sustainable Development Goals and the UN Secretary-General’s 2020 Call to Action for Human Rights.

The initiative will also look further ahead to inform and contribute to wider debates on strategic visions in connection with the climate agenda and the need for a just transition to a green economy by 2050; and the perspectives that the business and human rights agenda can offer for sustainable pathways into the next century

The Working Group will report to the UN Human Rights Council in June 2021 and delivery a Roadmap for the Next Decade, co-created with partners and based on multi-stakeholder inputs, setting out an implementation strategy with goals and targets for States, business enterprises and associations, international organizations and other actors, to be launched at a dedicated event celebrating the tenth anniversary of the UNGPs.

MCRB and CIAG held a discussion on 11 January on how the ‘Framework for Dignity in the Built Environment’ could be used for new building projects and renovation in Myanmar.

The 2020 Report assesses information disclosure on the corporate websites of 260 large Myanmar companies, including listed, and public ones, and for the first time, includes all banks.