MCRB at the Asean People Forum 2014

On 22 March 2014, the Myanmar Centre for Responsible Business hosted a workshop entitled “Promoting Inclusive and Responsible Business: Experiences of Myanmar, Singapore and Across ASEAN” at the ASEAN People’s Forum on Business and Human Rights at Myanmar Convention Centre in Yangon. An expert panel included representatives of MCRB, Myanmar civil society organisations including Badeidha Moe, Paung Ku, and Karen River Watch as well as Maruah Singapore, and the ASEAN Human Rights Resource Center.

Their presentations and discussion covered the following key points:

Over 100 participants including representatives from local and regional organizations and individuals took part in the workshop which adopted recommendations to government as follows:

These were included in:

The statement of the ACSC/APF itself consolidated all the recommendations from 35 workshops held on that day on key four topics such as peace, fairness, development of Human Rights and democratic transition. The consolidated statement was transmitted to the ASEAN governments that will meet civil society representatives on 11 May to discuss about implementation of civil societies’ recommendations.

Previous
PWINT THIT SA UPDATE: Almost Half of the Largest Myanmar Companies Don’t Yet Have Website 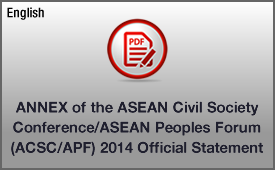 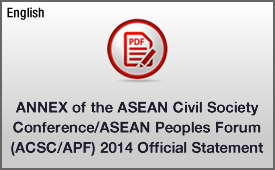